The First People's Hospital of Nanjing, Jiangsu Province, has found that prostate specific membrane antigen(PSMA）can present a more significant lesion imaging in prostate cancer cells with the help of integrated PET/MR, which can more accurately "capture" the primary and metastases of prostate cancer, effectively facilitating early diagnosis and treatment.

Invisible Killer of the Aging Male

The prostate is an organ without a sense of pain. There are often no apparent symptoms in prostate cancer's early and middle stages, so it's difficult to make patients stay vigilant. Prostate cancer is a relatively special kind of cancer. Unlike other organ cancer that will grow into a tumor, the prostate won't become larger in prostate cancer. Once the patient has symptoms, such as pressure on the urethra, it often means the advanced stage of prostate cancer.

Many celebrities such as Reagan, former president of the United States, Murdoch, a media tycoon, Mandela, former president of South Africa, Li Ao, a well-known writer, and Warren Buffett, a renowned investor, all suffered from prostate cancer in their later lives. According to statistics, currently, there are more than 10 million people in the world suffering from the disease, which approaches the population of London. Due to China's low early diagnosis rate, the proportion of patients with advanced prostate cancer is much higher than that of developed countries in Europe and America. Prostate cancer has become the fastest-growing malignant tumor for men in China in the past decade.

Prostate cancer refers to malignant epithelial tumors in the prostate, the most common malignant tumors in a man’s genitourinary system. The main clinical symptoms include difficult urination, abnormal urination frequency, chronic pain in the lower back, hip, upper limbs, or other bones, and significant weight loss. Prostate cancer often occurs in middle-aged and older men, increasing with age. It’s called the "invisible killer" for middle-aged and elderly men.

Even if symptoms occur in prostate cancer's early and middle stages, they are often mistreated as parts of prostatic hypertrophy or old age characteristics.

Therefore, it's essential to increase the understanding of prostate cancer and pay close attention to early screening and treatment.

Over 80 years old: 50%
60-79 years old: 14.76%
40-59 years old: 2.58%
Difficult early diagnosis
Even if symptoms occur in prostate cancer's early and middle stages, they are often mistreated as parts of prostatic hypertrophy or old age characteristics. Therefore, it's essential to increase the understanding of prostate cancer and pay close attention to early screening and treatment.

With the help of imaging, the early, whole-body, and non-invasive assessment of prostate cancer's primary tumor and metastasis is of great significance for accurate clinical diagnosis and treatment.

Combining the advantages of PET/MR multimodal fusion imaging, they obtained better anatomical information of soft tissues and more accurate anatomical positions. The application of different MR sequences enabled them to make a qualitative and quantitative description of primary tumors and metastases from different angles and contrasts, which could increase the positive detection rate to a certain extent and provide a more reliable and practical reference for diagnosis and treatment. Meanwhile, the substantial reduction in PET/MR ionizing radiation dose is significant for patients who need multiple follow-up examinations and young patients.

The whole-body PET/MR scan of the 68-year-old patient with prostate cancer, multiple lymph node metastases, and bone metastases shows all the lesions in the body.
Clinical Examples
Comparison of PET/MR and PET/CT Scans of the Patient
Providing more accurate lesion location: According to the CT scan (Figure A) on the left, the soft-tissue masses near the bilateral iliac arteries have uneven density. The sacrum has a slightly higher bone density on the left side. The PET/CT scan (Figure B) shows variable radioactive uptake. According to the MR scan (Figure C) on the right, b1000 DWI (Figure E) of soft tissues near the bilateral iliac arteries and the left side of the sacrum shows lesions with a high signal. Figure D and Figure F are the image fusion of PET and T2-weighted MRI with DWI, respectively, from which it can be seen that the expression of PSMA has increased and allowed for a more accurate lesion location. 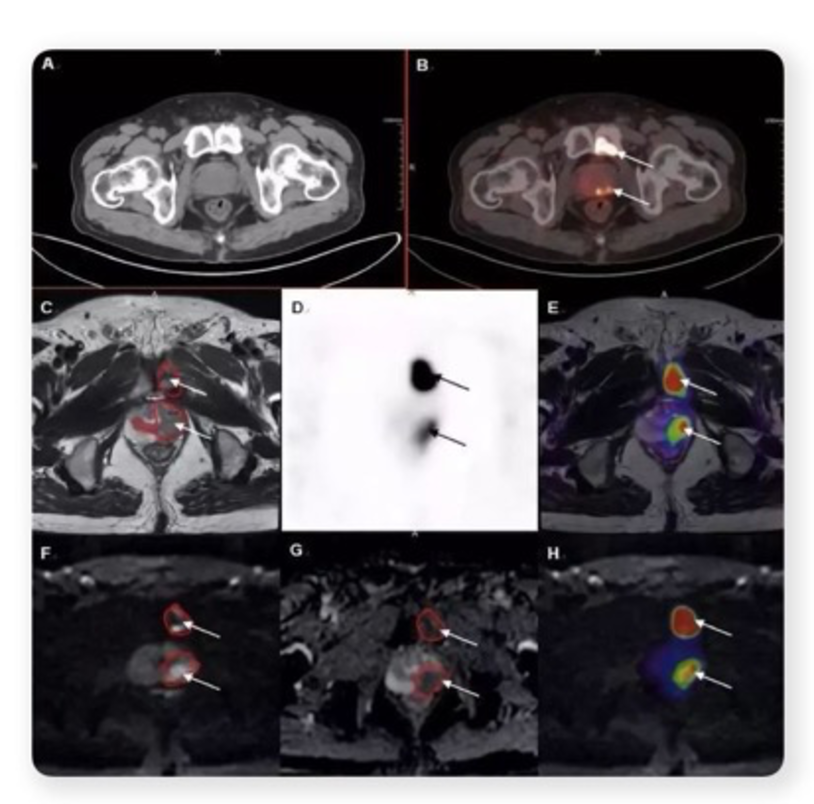 The whole-body PET/MR scan of the 67-year-old patient with prostate cancer, multiple lymph node metastases and bone metastases
Comparison of PET/MR and PET/CT Scans of the Patient's Head
An abnormal signal in the patient's prostate is found in the left peripheral zone. In PET/MR, T2WI (Figure C) shows nodules with low signals. Figure D and Figure E are corresponding PET image and PET/MR fusion image, both of which offer a higher expression of PSMA and allow for more accurate positioning. b1500 DWI Figure F shows high signal, ADC image (Figure G) shows high signal, PET and b1500 DWI fusion image (Figure H) shows higher radioactive uptake. In addition, the focal bone signal of the left pubic symphysis of the patient is abnormal. DWI shows a high signal, ADC image shows a low signal, and PSMA expression becomes higher. However, PET/CT (Figure B) shows only higher expression of PSMA in the lesion mentioned above area, without noticeable density changes.